Self Portrait, In the Basement
(2005-2007) (SOLD)
found oil, acrylic and primer on several found canvases and wood panels
62" x 80"
1. Goethe, claimed that the best creative impulses originated in the dark regions of the mind. He questioned the need for consequentiality and harmony in a chaotic world and believed the artist should paint not only what he sees before him but what he sees inside himself.

This body of work, the Darkside Portraits, completed 2005-2007, is an allegory for the outside world as created by my mind at that time. It's meant to be a gateway to a timeless place where subject and object intersect.

As allegory for subject connecting with object the work is meant to function universally for all. So it is a projected space or archetypal entry point for my own as well as the viewers own mind. The Darkside Portraits are a kind of crossroads or oracle one can use to put their innermost and outermost life into perspective. They were that for me.
PREV / NEXT   1 / 11
BACK TO PORTRAITS MADE IN... 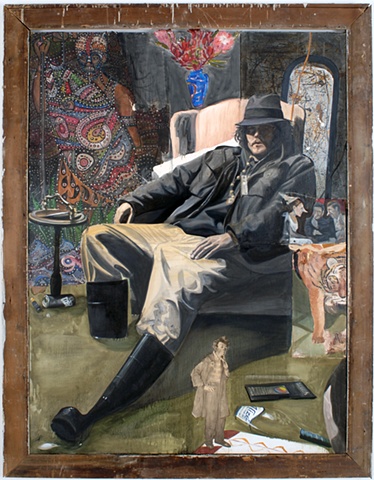