Akim, Akim and Black Magic
(2005-2007) (SOLD)
found oil, acrylic and primer on several found canvases
58"x76"
2. The work is as much about the process of making an artwork as it is about the space and experience surrounding the work of art. As with any contemporary or new form of art, the key to understanding the allegory presented here in the Darkside Portraits is in the backgrounds story.

This story and work began long before you or I were even born. These paintings are constellations of many smaller paintings and original artworks that I did not paint. Some of which are quite old and are no doubt based themselves on even older empirical models and ideas predating themselves and the artists who made them. There is no precise starting point to this work. As for my part in this works history as well as for story telling purposes, we will begin when these portraits consciously entered my mind.

I was traversing a remote jungle for a week and a half. I packed no food. During that time I had several visions as I tried to uncover an ancient trail said to exist there. The plan was to hunt and gather using what I found, made, and the few tools I brought with. Also to make a crossing. I would be meeting some good friends on the other side. It was a hasty plan and only conceived of on the night before. There was some success and some failure.

I thought the experience would be good survival practice to start to prepare me for some major world catastrophe or possibly just protect from it. In any event this was to prepare me for the rest of my life.
PREV / NEXT   2 / 11
BACK TO PORTRAITS MADE IN... 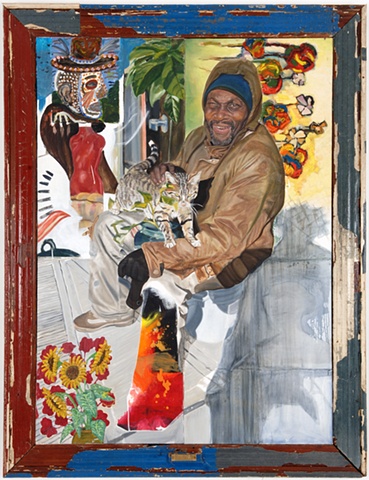